THE DANGER OF FREIGHT TRAINS THROUGH CENTRAL CAMBRIDGE

The East West Rail (EWR) project is planned to connect Oxford to Cambridge and then on to the east coast or Haven ports. Part of the project near Oxford has already been constructed but the Central Section between Bedford and Cambridge is currently being designed. EWR Co. took a decision to approach Cambridge from the south, rather than the north, and various route alignments are being prepared for a public consultation in early 2021. The Eastern Section, eastwards from Cambridge, is still in the very early planning stages.

Campaign groups Cambridge Approaches and CamBedRailRoad, have joined forces and are calling for alternative approach options to be considered. We believe that the current approach is misguided and will result in massive amounts of noise from freight trains in central Cambridge, potentially at night.

WILL FREIGHT TRAINS USE THE EWR?

Reliable information points to significant freight train use on the EWR route between the east coast Haven ports (including Felixstowe) and Cambridge through to Bedford and Oxford.

The Network Rail report into routeing of rail freight forecasts1 shows that about 50 freight trains (all types) per day could use EWR in 2043. This assumes that the route will be electrified (which is not yet certain) and significant capacity upgrades including a new chord where EWR connects with the West Coast Main Line at Bletchley. The Cambridge to Newmarket single track line would also need upgrading to realise this capacity.

At opening of the EWR in 2025, we estimate that freight demand would be about 20 – 30 freight trains (all types) per day based on England’s Economic Heartland report.2 This would also require capacity upgrade of the Cambridge to Newmarket line.

The EWR Consortium who are, in contrast to the EWR Company, responsible for delivering the EWR east of Cambridge have recently signed a contract with rail consultants Steer. In the draft tender documents, EWR Consortium have stated:

East West Rail presents a huge opportunity to become a secondary freight route, enabling more services to bypass congested London routes currently used to get to the South West, Midlands and the North. It also presents an opportunity to move aggregates for the development of new housing and nationally significant projects, such as Sizewell C.3

Even EWR Company have confirmed that the route will be freight capable in responses to our specific questions on this. It is possible that spent fuel rods from Sizewell C nuclear power station will use the route on the way to Sellafield.

WILL FREIGHT TRAINS RUN AT NIGHT?

Cambridge Approaches think this is likely.

While it is not possible to be definitive about exact numbers of night-time freight trains, we think that it would not be feasible to run the forecast number of freight trains during the day with the projected passenger timetable of about 4 EWR trains per hour into and out of Cambridge, especially using the freight figures for 2043 (see above).

This scenario is endorsed by the England’s Economic Heartland report referred to above (p.67) which states: “However, there is a risk that capacity for freight trains, in terms of daytime timetable slots, will be limited.”

This has been further verbally confirmed by Ian Parker, EWR Co.’s Operations Director, who said that passenger and freight rail traffic do not mix well together.

Yes: with a southerly approach into Cambridge, there are no feasible alternative routes for EWR freight trains going towards Felixstowe – see sketch maps below.

Cambridge City could potentially ban all night-time freight trains from central Cambridge. While this would alleviate the potential night-time noise issue, the huge environmental opportunity of maximising the reduction in road freight would be missed. The Department for Transport’s Rail Freight Strategy states that each tonne of freight transported by rail reduces carbon emissions by 76% compared to road (as of 2016).4

The obvious alternative would be a northern approach into Cambridge. This would allow freight trains to avoid passing through Cambridge Central station. There are several options possible, some entirely avoiding the built-up areas of Cambridge and others that join the existing Cambridge to Newmarket line via a new chord on a corner of Coldham’s Common. All could be routed to pass close to new housing developments, such as Northstowe, which could be designed to minimise the impact of noise on residents. Such options could be partly located in existing road corridors and so reduce the overall environmental impact.

WHAT WE WANT TO HAPPEN

We urge EWR Co. to undertake a fair assessment of, and public consultation on, northern approaches into Cambridge.

WHAT CAN YOU DO ABOUT IT?

The publication of this post by Mill Road Bridges should not be considered an endorsement of the views of campaign groups Cambridge Approaches and CamBedRailRoad. Neither should this statement be read as one of opposition to their views. Our mission is to facilitate information and debates about all matters affecting Cambridge’s Mill Road. This post is open for (polite) comments.

This site uses Akismet to reduce spam. Learn how your comment data is processed.

Hello there. I live in a cul-de-sac off Ainsworth Street which ends at the railway right opposite Coldham’s Lane carriage sidings. I have lived there for 12 years. Only once has the railway woken me (and several others), when a charter train with an early start from Cambridge was parked in the loop for an hour or so and the diesel engines left running. Foul emissions and noisy engines.

I know of no other objections to the railway from this vicinity especially in relation to night time operation. I suspect the same is true from all lineside habitation between Mill Road bridge and Coldham’s Lane bridge. What noise there is, the hearer quickly adjusts to and life carries on and house value is unimpeded.

As indeed was the case when HS1 was proposed, from the Channel Tunnel to London passing through Kent, back in the nineties. I believe it most unlikely that any property values have fallen, medium term, since then or that people still complain about railway noise, unlike the noise and fumes from the M2. In short, I believe your campaign to be perfectly understandable, but utterly misinformed and mischevious.

I firmly believe East West Rail, as a concept, to be first rate and a beneficially transformative influence on railway journeys to and from Cambridge, not least by avoiding London. I will continue to support it utterly, unless new facts change my view.

I suspect that upgrades between Cambridge and Chippenham junction (east of Newmarket, the other end of the tunnel) – track doubling and gauge upgrading from W8 to W10 for container freight are likely to be considered prohibitively expensive, when an excellent alternative route (F2N) is already available.

The article is not arguing about the merits of EWR as a worthwhile project (although the benefits to cost ratio hasn’t been shown to be above 1, let alone the 2 that Treasury usually require).
It is saying that alternative routes should be considered that allow freight to avoid built up areas where possible – I don’t think all people living near railway lines would share your views if there were a significant number of long diesel freight trains running during the night.

However, a direct Cambourne – Cambridge South Station link is essential for taking car traffic off our roads. And Oxford-Bedford-Cambridge-Norwich/Ipswich wouldn’t work well with a northerly entry to Cambridge.

Chris, you are lucky not to be disturbed by noise. Perhaps you would like to consider the effect these proposals to funnel all new rail traffic on the East West Rail link through the city will have on others along its route?

East West Rail Co’s proposed southern approach will do just that, and levels of traffic, especially freight will increase such that even a decongested Ely/Peterborough freight route will not be able to cope.

Incidentally the East West Rail link was conceived as a strategic freight route so has particular status. Passenger traffic will indeed provide useful travel options as you indicate. Environmental concerns are a priority and will become more so, freight on trains is six time less polluting that road freight.

It (EWR link) would also offer an alternative to the existing (freight) route via Ely by providing a new link via Newmarket and Cambridge.

The report is worth reading as are numerous other documents available online.

In short I do not consider it in any way ‘mischevious’ to highlight relevant facts about this little known project (third largest in the UK).

By the way, I support it ‘utterly’ too, but to be built in the very best way.

Rail noise is often related to points. It is possible to eliminate the clickety-clack through a junction by using a different type of pointwork. High speed trains use a variety of point which does this. There is a particularly nasty one south of Hills Rd bridge. Every train coming in from the south crosses it. Passenger trains are shorter, sometimes, so make less noise. But otherwise there is no difference. :-\ People who live in that area can tell you what the noise is like – ask them.

Noise from railways is a mixture from various sources, including as you say from points. It includes the engine noise (EWR are currently sourcing second hand diesel locomotives for passenger services), wheel noise (especially where it goes round tight curves such as the one on Coldhams Common and over rough sections of track) and the rattle at connections between wagons/carriages. Take a look at this YouTube video which shows freight and passenger trains on railway lines in the Fens.

Hello, I’m not sure what I’m supposed to notice from this video. I couldn’t stay awake while it was playing – the sound sent me to sleep.So I tried watching it again – and fell asleep again.

I’m less worried by the noise (although that does concern me) and more by the added pollution of diesel freight. I see the tenders are out now for diesel so that’s definitely happening. 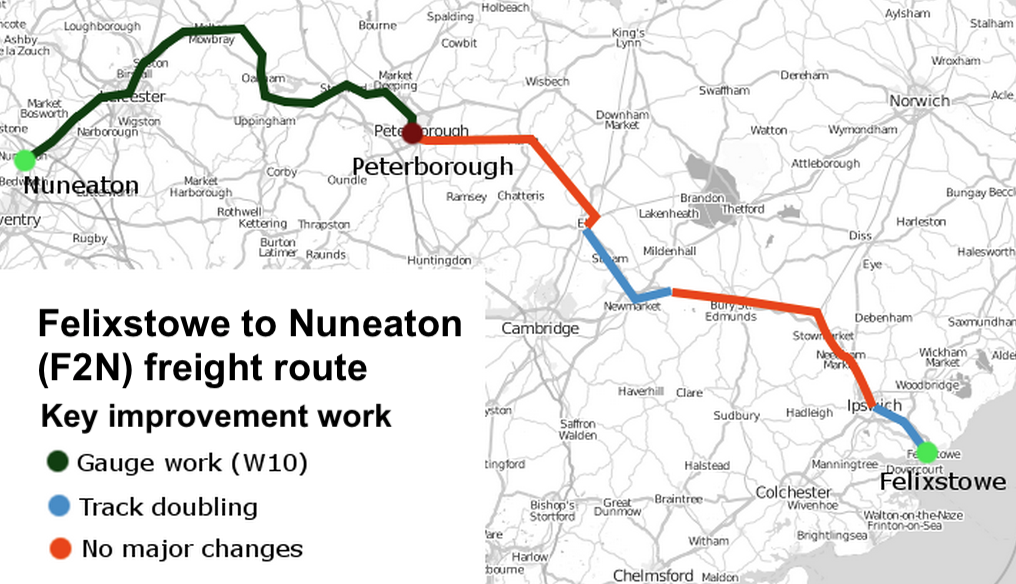 Some upgrade work is still outstanding, particularly doubling track from Ely Dock Junction to Soham and crucially the long-overdue re-modelling of Ely North Junction. See this diagram from 2017. 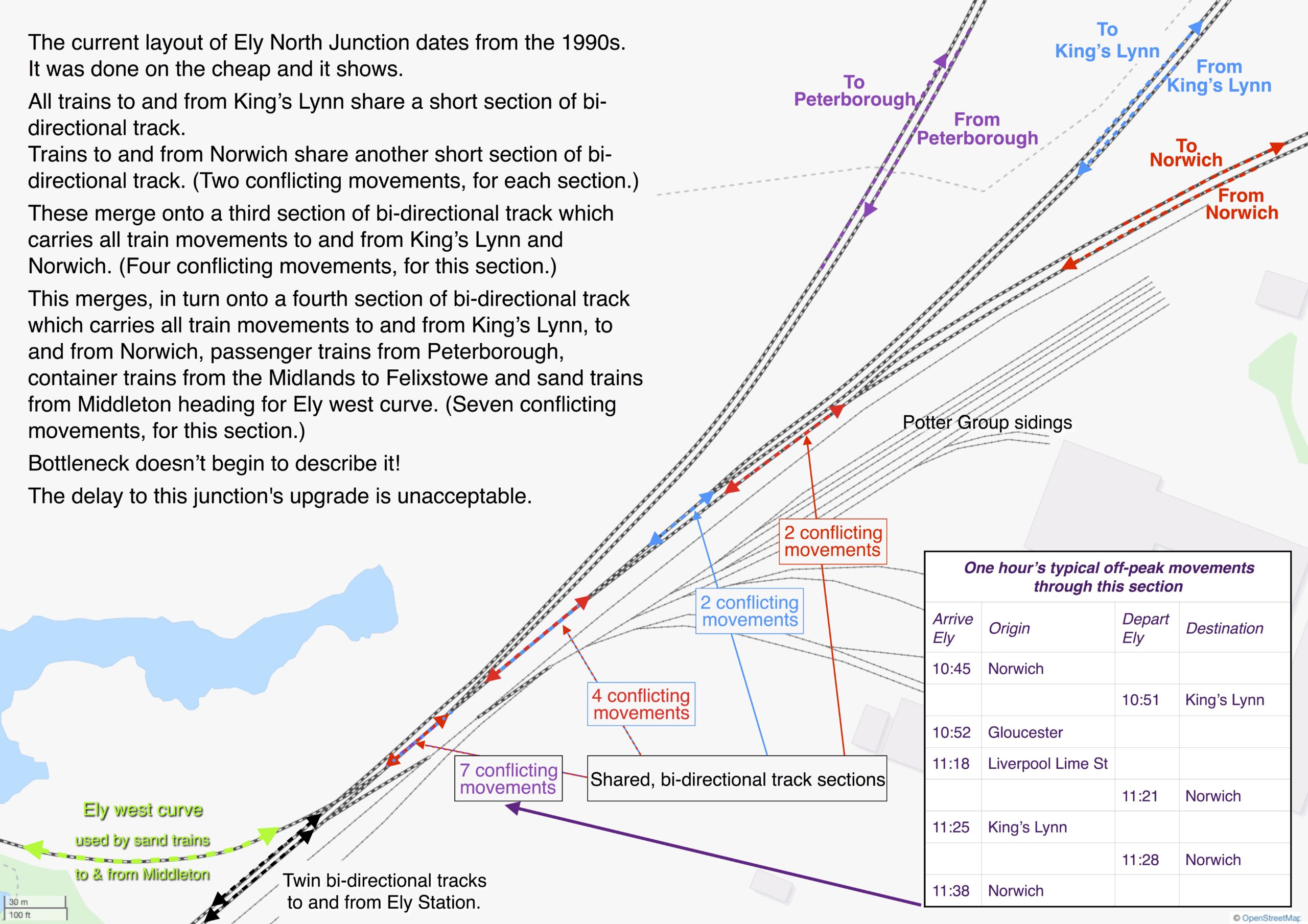 You are correct that the F2N is the current route from Felixstowe to Nuneaton and beyond. However, even with the Ely improvements, it will not be capable of taking the demand from Felixstowe which will increase over the years as indicated in the references in the article, especially because of the increasing restrictions on the London route. Also it is good to have alternative routes to provide resilience in the freight system (for breakdowns, line issues and maintenance).