No, not the Rose Royce Car Wash disco song nor the Bosham Car Wash where unwary motorists ignore ‘Road Flooded at High Tide’ notices. No, this is a trainwash, no dancing and no delicious schadenfreude.

Residents of Great Eastern Street, Cambridge, are fighting plans for Govia Thameslink Railway to build a huge industrial trainwash facility behind their homes in the middle of the Mill Road Conservation Area.

Govia Thameslink Railway has been quietly planning a 12 carriage train wash facility to be built behind homes on GES since 2018. Public engagement only started late 2019 and there has been little meaningful consideration taken for the health and amenity of residents on the street or the wider community. The trainwash is proposed to be immediately behind residents’ homes and in the middle of the Mill Road Conservation Area. This will affect Romsey and Petersfield residents, and anyone crossing the Mill Road Bridge.

I would hope that Govia Thameslink Railway and Network Rail reconsider this. It really shouldn’t be behind a residential street, a small street like Great Eastern Street with children and young families. Unfortunately something as massive as that is going to erode our wellbeing here.

The plans for the trainwash show it to be 33m long, 9m tall and 7m wide. In addition, a pump facility will be between back fences and the trainwash facility. The trainwash will be 25m from residents’ back fences and gardens. Residents are shocked and angry with the latest information that Govia Thameslink Railway did not need to apply for planning permission at all for such a huge building so close to a residential area. GTR claim that while the Mill Road bridge expansion required planning permission, the trainwash falls under ‘Permitted Development’ and thus did not require full scrutiny. Cllr Dave Baigent has been active on the matter and sits on the City Planning Committee and notes it did not come before that decision-making body.

There is no doubt that the city council would have really serious reservations about building this if it were subject to planning permission… they could have put this outside of the city. This is right in the middle of Cambridge city, it doesn’t need to go at the end of people’s back gardens.

Govia Thameslink Railway claim that noise from the trainwash will be 40dB measured at the fence line of the closest resident, but has not released the modelling or its assumptions. Residents are concerned that the modelling does not include all the relevant noises: trains moving through the facility, mechanical brushes, water and chemical spraying and pump engine sounds. Govia Thameslink Railway is proposing that this facility will be in use 24/7, with approximately 4 trains per hour (washes takes about 10 minutes per train), and peak time in the late evening and early morning. As well as noise pollution, there will be chemicals being used but little information has been forthcoming about this.

To support the folks of Great Eastern Street, you could sign their on-line petition, here.

And, maybe, you could email them to offer your help in their campaign.

This site uses Akismet to reduce spam. Learn how your comment data is processed. 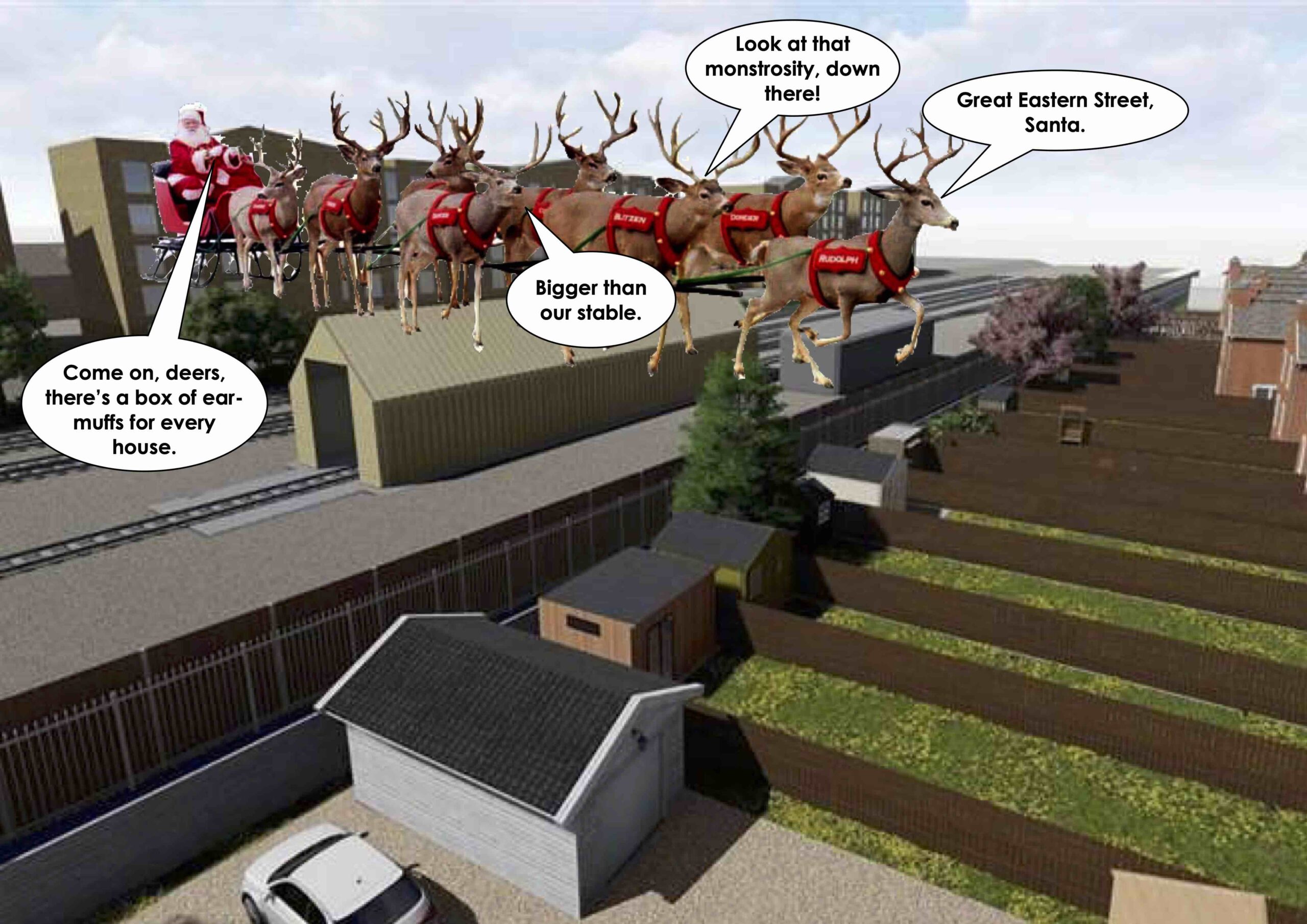 I see no mention of the singular lack of success, not to mention the time wasting and unnecessary use of public funds, now evident from this news – New Cambridge train wash to be built but concern work will take place over Christmas – just made public.

In fact it appears that an effort is being made to hide such news by diverting their attention back to the issues of the Bridge traffic restrictions and effects on pedestrian safety and future trader prosperity in Mill Road!

We were unsure who Edward was criticising for lack of publicity, here, nor who is hiding the news. This article is in the Cambridge Independent and has also been covered on BBC Radio Cambridgeshire news bulletins.

We contacted Edward for further comment. Which we show, below.

In my opinlon the trainwash action was plainly going to be unsuccessful from the outset! The whole process of investigating what is a time-worn process of planning permission for construction of vital equipment necessary for the functioning of the National Rail Network, notwithstanding the accepted, unchallenged positioning of an open air trainwash alongside ‘luxury’ apartments in Rustat Road over the last 20 years.

But I feel the City Council’s involvement and establishing an investigation in that way was questionable.

Whilst this is not directly related to traffic restrictions on the bridge in any way whatsoever, I was merely interested in the timing, as mentioned in my reply above.

Thank you for raising awareness of this issue! It’s simply incredible that they can build such a massive industrial structure right behind our homes and make noise 24/7! I have a toddler and I’m also really worried about chemicals ending up in her bedroom facing the garden.